Afterglow of a Instant Classic 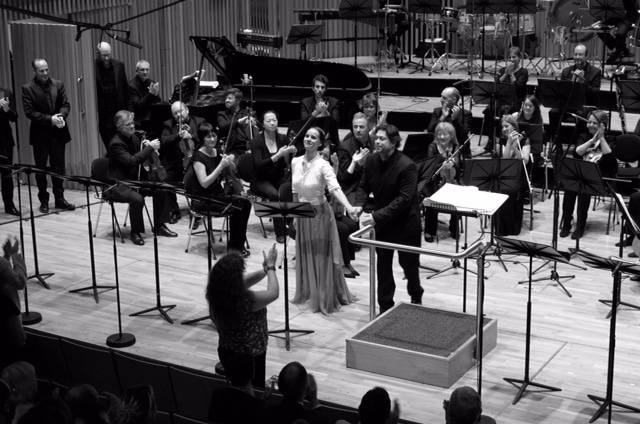 ‘Music, when soft voices die…vibrates in the memory’ (Percy Shelley)

Two days after the recording and premiere of Jane Eyre with David Stout, Mark Milhofer, Gwion Thomas, Kenneth Woods and the English Symphony Orchestra, these lines by Shelley capture my sensations, along with this portion of Kenneth Birkin’s marvellous libretto:

This is the sweetest hour.
The sun going down in simple state
Sheds golden blessings on mankind.
Extending high and soft and wide
The radiant heavens over…
Lingers as I do…
loth to leave this hallowed place. (Jane Eyre, Act I, Scene III)

It is as if, for a few days, a door opened into another world, luminous, passionate, aching with desire and regret, haunted by fate and warmed by redemption in turn.

Joubert’s astonishing music is like a sonic embrace of tangible power, and to spend three days wholly enfolded in it, exploring its multiple layers of nuance and richness, was an experience that will live with me long.

In one way, it was like watching the ‘dry bones’ described by the prophet Ezekiel take on flesh and breath. When I plunked away at the notes on my own, I got melody and some chords, the first sketchings of outline.

When I coached it with the inimitable Kelvin Lim, I began to understand more of the breadth and harmonic power of it—the skeleton and a few tendons. As I coached it with our wonderful assistant conductor Michael Young (who recorded a piano version of the score for rehearsal, for which I wish him eternal blessings), the tempo relations and transitions fell into place: sinews and cartilage, bone and some muscle.

When we had the piano rehearsal on the Sunday with all of us on stage and Ken at the helm, it was the first time I’d heard the whole work sung: muscle upon muscle. When the orchestra began to rehearse the opening, the skin emerged, and as we worked over the course of the ensuing two days: behold—there was breath, a vast army.

My sensations on that first morning hearing the orchestra were primarily of a profound sense of déjà-vu, a sort of recognition as of something I’d known from of old, mingled with a disbelief that this was the first time that anyone—John Joubert included—had heard the work in its full orchestral glory.

It seems utterly impossible that something so masterly, so utterly complete and compelling, has not been known and loved and praised and savoured in darkened theatres and front rooms (with a glass of nice wine and a fine hi-fi) for years.

Strangely, at that moment it felt as though it had, as though we were all sharing in some curious way with the rich, vital life the work has lived in the heart and soul of the composer all these years, all the play-throughs of snippets to the friends and family who thronged around him on the evening of the premiere, their hearts full, their mouths overflowing with excitement and praise.

In Chapter 30 of the novel, St John asks what Jane, as the mistress of a small village school, will do ‘with your accomplishments? What, with the largest portion of your mind—sentiments—tastes?’ She replies, ‘Save them till they are wanted. They will keep’ (p. 351-2). In a way, that is what I feel about this work, as though it has lain, quietly waiting, in all its glory and substance, ‘keeping’ for the right day when it is wanted. 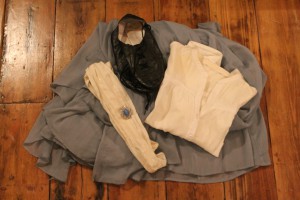 And singing Jane? Ah well, that has been a long time coming, methinks. I have known and loved Jane Eyre for more years than I can count. My hand-writing in my copy of the novel betrays the years that have passed since, the number of times I have pored over those pages, soaked them in.

Brontë’s great stroke of genius was to make Jane plain, to vehemently reject the Mills-and-Boone model of beautiful people for one of a defiantly realistic ‘Everywoman’ with whom anyone can identify. Rochester is not handsome either, and though in many ways he is a classic Byronic hero, with his list of secret sins (first, of course, his hidden wife Bertha, the original ‘madwoman in the attic’), he is very much a complex, deeply flawed being.

For this, I have loved the tale. Because it reads like real people seeing each other and loving what they see, liking as well as loving, and that genuine affection, that connection of mind and heart weathered the cataclysms of betrayal and ruin. It is catharsis of the highest order, indeed a ‘ravishing reconciliation’, in the words of critic Christopher Morley.

I think I felt such an immediate sympathy with John’s score because it was so obvious that he too loved the book—always a good start! As I studied the score in more depth, there seemed no end to the symmetries and layers, the inferences and echoes, both internal and external.

He and Kenneth Birkin had obviously poured so many hours of thought and devotion into how they wished to portray this pair, to paint each bit of subtext, to find just the right music to capture the dramatic pacing of key moments like Jane’s return to the blind, maimed Edward.

His use of silence is wondrous, as at that precise juncture, where Jane’s first tender word to Rochester, his name, is given in an unaccompanied line of a simple falling fourth, in free time. Rochester’s responses are preceded and underpinned by the ‘fate’ motive, growing in excitement and shifting gradually from minor to major, alternating with more unaccompanied replies from Jane. It was so tender, so right, that at times I didn’t want to breathe lest I spoil it, obviously rather a dilemma for a singer!

In many ways, singing this role felt like putting on a second skin, stepping into a dress made precisely for my vocal measurements. If John had known my voice and performing persona and capabilities intimately, he could not have written something which felt more natural, more gloriously fulfilling to sing. His music filled me brim-full, echoing something already latent within me. It thrilled me to the core.

Joubert has created a major operatic heroine with a truly epic emotional journey, and to live all this many times over in the course of three glorious, intense days was really quite extraordinary. To me, he has gotten just the right mixture of Jane’s passionate nature (with all her large vocal leaps and storming crescendos over long ascending lines) and her self-possession (lots of repeated notes, where she is gathering her thoughts and strength to resist control and assert her will).

To continue to plumb both heights and depths of tessitura and emotion (see below for my little tot-table of high notes and low notes!), from defiance and high drama to great tenderness, was a huge challenge, but thankfully, it was not one I faced alone! 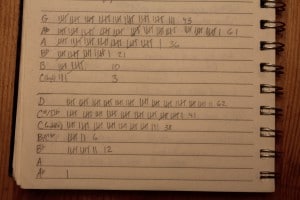 Jane, however substantial in her own right, is only a half without her Rochester. The musical twin and counterpart in motivic genius, Joubert has created an equally incredible role with echoes of Onegin and Janáček and Vaughan Williams’ Sea Symphony. Rochester’s moodiness, his difficult-to-excuse toying with Jane’s emotions as he struggles with the implications of his own for her, his combination of roughness and tenderness, his weariness in discovery at the wedding and continued defiance in attempting to keep her, his utter brokenness and touching vulnerability at her return—Joubert has captured it all.

In particular, the arias after the scene where Jane saves him from the fire and his soliloquy in his ruined abandonment are each a complete tour-de-force, both vocally and dramatically. And David Stout was an absolute match for the greatest demands of both.

As I sat on that stage in the Barber Institute at the piano rehearsal, listening to the astonishing artistry and dramatic intelligence he poured into every phrase, I felt anew incredibly privileged to be there.

My body literally vibrated with the strength of the sound he produced, yet on some notes like the lines ‘One last brief glimpse of youth…Sweetness, innocence’, he brought it right down to a near-whisper in the complete, hushed mezza di voce which few baritones have the courage or capability to command as he does. Your heart just skips a beat with beauty like that.

From thundering top F’s and melismas on ‘howling to her death’ to sepulchral rumbles on the last words of ‘Thornfield, her prison and mine is no more’, he seemed to have rummaged around Rochester’s heart and viscera and turned them outward to the ear, so completely did he paint their wide range of light and shadow with his voice. Well might Jane fall, and fall hard, for such a man. Toby Stephens, move over on the ‘Bench of Swoons’!

I think I shall never forget shaping the final phrases of Act I, Scene III and Act II, Scene III on the words ‘It is as if, transcendent…we stand in quiet humility before God’s throne, equal as now we be’. Both taking obvious delight in gesture and tone to shape and match the tiniest aspects of colour and consonant. The translucent beauty of the orchestra dying away to embers behind us in a truly breathless conclusion.

The whole work is so darn satisfying, it’s unreal. Seriously, even if you think you don’t like opera, this could well be the piece for you. The music is vivid as a film score, intricate as a symphony, a pure dream of a work, honed over the years till not an ounce of musical fat remains, no empty bars, no wasted gesture.

We had three days to get our teeth into every inch of it, hear it over and over, cast light onto every corner, and let me tell you, it will not disappoint. In fact, it will reward multiple visitations as any masterpiece does.

Sitting watching David record on the Tuesday, I thought (and said to my wonderful cover Sofia Larsson), ‘I would go to see this opera—many times!’ She heartily agreed. Dramatically it is utterly compelling, riveting, spiky and crunchy just where it ought to be and open-mouthedly, tear-jerkingly gorgeous just where it needs to be.

And I got to sing ‘Jane’ for the first time she was ever heard. That is a joy and privilege of which I am still in awe and shall always be, I think. As I told John Joubert at the reception after the premiere, in my opinion, it was 25 years very well spent. I cannot wait to share this work with others, to invite them into the heart-stoppingly beautiful world Joubert and Birkin have created. Oh my, you are all in for a treat! 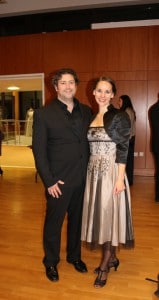 ← Role as Relationship Death and the Semitone →