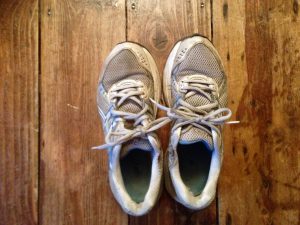 Today was a bit of a triumph, a laying to rest of old ghosts.

For the first time in my memory, I went for a run (3 miles, if you wish to know details), and actually enjoyed it—all of it.

No doubt it helped that it was a mild spring evening, that I was running around the perimeter of the rather lovely Victoria Park, skirting ponds and a pagoda, ornamental flower beds, the canal with its bright, cheerful rows of narrow boats, expanses of smooth green grass, and passing beneath row upon row of gracious plane trees, alcoves of the old London Bridge (its 1728 incarnation), the whole bathed in slanting rays of that particular golden sunlight peculiar to late evenings and general satisfaction.

But still. I ran, and I enjoyed the stretching, the warm-up, the settling into a rhythm, focusing on my breathing, releasing tension, increasing the spring in my step, the gentle pushing through barriers of fatigue, savouring the breeze on my face and the feeling of steady movement in my limbs, centring thought to one step at a time, and finding the final burst of energy past the Approach Tavern to my own front door.

I can see the Gallic shrug from my sitting room sofa: why is this significant? As a child, I had a particularly spirited PE teacher (now sadly no longer with us) who was, no joke, a former Army drill sergeant. I had childhood asthma, so gym was unfailingly excruciating, with his face often inches from my own, challenging me: ‘Is that all you’ve got, Miss Fredrick?’ Usually it was.

Pressing my failure to achieve deep into my quailing consciousness as I vainly attempted to haul my chin up to the pull-up bar, which might as well have been in Antarctica for all the chance I had to reach it. Or puffing and wheezing through the interminable laps round the block of the now-bulldozed Franklin Middle School to clock up another abysmal time for a mile.

I just couldn’t win. So slowly, without realising, exercise became associated with public ritual humiliation. Now I’m sure that many other girls in my class probably felt similar; I don’t remember asking them, with a teenager’s understandable reticence on such topics as could injure my fragile self-image even further. I also found out, many years later, that this same PE teacher was a disappointed minor-league baseball player. Learning about his crushed dreams did lend me more sympathy for him, but it didn’t remove the scarring of his mocking voice in my ear.

On one level, the damage wasn’t too profound, as a few years later, I joined the school volleyball team, and stayed on it for 5 years. It was a team sport, so the focus wasn’t solely on me. And I found that I hated the ‘star position’—and the pressure—of being a ‘hitter’, the front-row player tasked with ‘spiking’ the ball to complete a play. I far preferred the ‘service’ positions of back-row and setter. And serving itself? I was either lethal or rubbish, the only pattern my unpredictability from game to game. I wish I could say there is no correlation to my later life.

But when I went to Europe during my junior year of high school, there were no team sports I knew how to play, and when I came back, having got out of the habit, I didn’t re-join the team for my senior year. Nor did I play college sports, though they were offered and in some cases quite strong at my university. I play for fun at family reunions and random gatherings, but mostly I keep my competitiveness to the fussball table (where I assure you, I get very heated indeed).

And no, I do NOT go to the gym. For I had developed a lasting antipathy, almost an allergic reaction to gyms, to places where my progress would be visibly measured against another’s. A strange position, one might say, for a professional performer. Perhaps executing one ‘sport’ (for proper singing IS a taxing physical activity) to an Olympian level is enough for me. At any rate, I pass gyms with an internal shudder, quickening my step.

There has been one notable exception. For one season, I joined my parents in solidarity in doing the lead-up programme to the rigorous P90 exercise regime, later switching to the videos of the frighteningly named Insanity series with a friend in London, the two of us jumping and waving our arms about in the mezzanine of the St Barnabas Dalston Mission Hall. Much to my astonishment, I found that I rather enjoyed it. With the aid of a close-up camera shot and a body microphone, the coaches could be encouraging in normal voices, even funny and charming, and I could choose my own level of engagement.

In a true momentary lapse of sanity, I attended precisely one session of a group Insanity fitness class, and it was like being dragged back 25 years, with the teacher yelling out instructions and coming round to each of us, lashing us on to more repetitions, higher, faster, deeper. When I finished, I actually felt physically ill, and absolutely livid: the experience had pressed more internal buttons than a fighter pilot in combat. Never, I vowed through gritted teeth, would I do that again. Ever.

So I’m afraid that all the glossy ads of sweat-gleaming trim girls with kettle bells have no power over my imagination. I would rather go hill-walking for 4 miles, or 8, or 10, getting conversation and great views and proper progression of place and perspective for my pains, go swing dancing for an evening (pure joy), or do yoga.

Or do some singing practice, which, if I’m doing it properly and practicing a big piece, gets my heart rate up to circuit-training levels. It’s true. I once went into an audition, having had a 5-minute brisk walk from the tube station and a 5 minute wait, sang the virtuosic ‘Martner aller Arten’ by Mozart, and came out sweating. And not from nerves. So there you go.

But tonight, tonight, I had fun running, and that is a big deal. I am more a tortoise than a hare, by any standards. My form is probably shocking. I will win no awards for speed or style, and I will probably never run a half-marathon, let alone a marathon. But for the second time in two weeks, I ran 3 miles without walking a step.

And my secret was this: At each new section, I said to myself, ‘You don’t have to keep going; you can walk. It’s okay to stop’. Thus continuing became a continual choice, an exercise of agency in which I could say, ‘I know, but I choose to continue’. Knowing I could stop at any point actually gave me more energy to persevere than if I had doggedly set my goal and pursued it come what may.

For an overachiever often crippled by unreasonable self-expectations, it was an epiphany of epic proportions. I was slow and probably sloppy, but I was happy as Larry (in the memorable if inexplicable British phrase), going at my own pace in the evening twilight, finishing what I’d vaguely decided to achieve if possible, bit by bit.

I am in the middle of reading an excellent book by Emily Ley called Grace not Perfection. Perhaps it is rubbing off. Perhaps tomorrow, and the day after, and the day after that, I will try working it into other parts of my life, setting attainable goals, silencing the voices of the past with present truths, giving myself permission to slow down and stop if needs be so that I can enjoy the scenery and the experience along the way.

I need new trainers if I’m to keep this up, symbolism if ever I’ve seen it. I’ll let you know how I get on. If you meet me in the park, puffing along slowly with beatific surprise at my continued forward motion, wave, smile indulgently, shake your head, and say, ‘Well, you never can tell’.